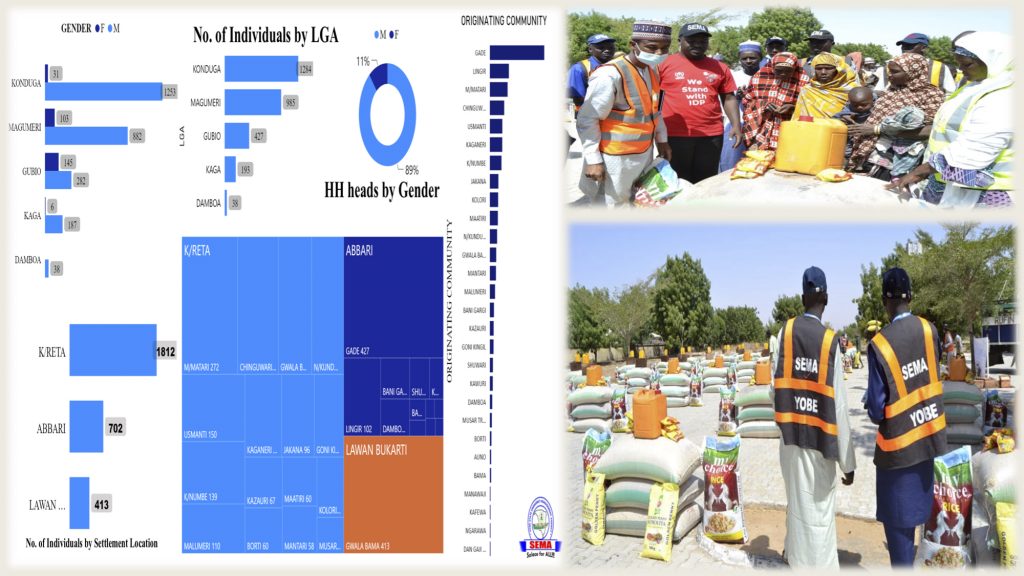 Yobe State Government through The State Emergency Management Agency (SEMA) has profiled new arrivals (IDPs)  from 4 LGAs of Borno State (Damboa, Gubio, Kaga, Konduga and Magumeri LGAs). The new arrivals who came from 31 communities after being displaced as a result of activities of the NSAGs and or fear of attacks due to reprisal and run-away members of the NSAGs along their axis and originating community.

After the assessment and registration along side Damaturu LGA team and security personnel, over 2000 individuals and 700 HH were captured. As a first line response post-assessment, the state in partnership with the National Commission For refugees Migrant and IDPs (NCRMI) supported over 200 aged vulnerable returnees with food baskets. According to the Federal Commisioner, Senator Bashir Garba (Lado) who is ably represented, Said ” this is part of our mandate and we will continue doing our best in line with president Muhammadu Buharis drive to cushion the hardship of the Vulnerable population”

The executive Secretary of Yobe SEMA while Thanking the federal commissioner, also noted and appreciated the cordial working relationship with the commission and assured them of judicious utilisation and further called on them to include Yobe State in the ongoing Mass Housing project implemented by the agency for IDPs.

ES SEMA Dr Goje Mohammed also noted that, this intervention is just 10% of the already registered new arrivals, and assured the agency that Yobe State Government has already set up plans to reach out to all those in need and also facilitate return of the new arrivals or reintegration in to host community while they await their original homes to become safe for return.